Piles of pumpkins and kitties 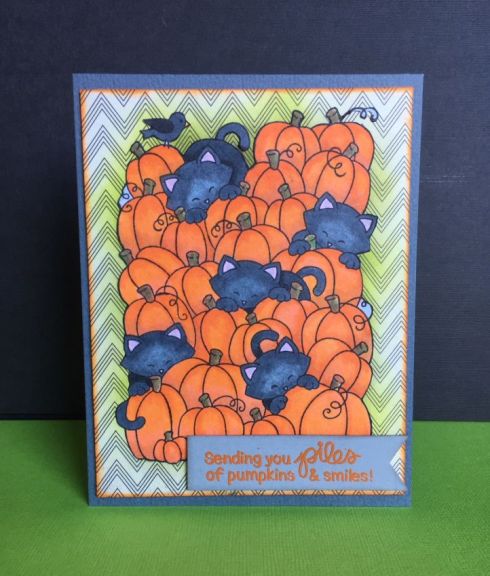 This is a pretty adorable image of the kitties among the pumpkins by Newton’s Nook. Their animal designs are some of my favorites! I colored the image with Copic markers and trimmed it out so no white was showing. I inked the edges with a black Sharpie to cover any white paper edges. The sentiment is heat embossed, adding a little shine to the words. I trimmed the sentiment flag-style. Before I adhered the foreground, I applied some Distress inks to the patterned paper, beginning with Hickory Smoke and then adding Peeled Paint ink for a colorful shadow beneath the image. I popped up the image with dimensional adhesive and then edged the panel with Carved Pumpkin Distress Ink. Thanks for visiting today.

This entry was posted on Wednesday, October 10th, 2018 at 12:10 pm and tagged with cardmaking, copics, distress techniques, embossing, fauna, newton's nook, Ranger, stamping and posted in Autumn, Coloring, Halloween. You can follow any responses to this entry through the RSS 2.0 feed.
« Give Thanks
Free to Fly »

2 responses to “Piles of pumpkins and kitties”